“We can be bigger than this. These fences don’t define us.”

Two years ago, Hope College and Western Theological Seminary (WTS) began a pilot program to offer a Christian liberal arts education to long-term incarcerated men at Muskegon Correctional Facility in Muskegon, MI. We are pleased to announce that the initial success of The Hope-Western Prison Education Program (HWPEP) has led the college to pursue taking steps to accreditation. Essentially, the prison will become an extension campus of the college, and men housed there will be able to earn a Bachelor of Arts majoring in Faith, Leadership, and Service with standards as rigorous as those expected of Holland-based Hope College students.

A cohort of 20 students will be added each year until the program is fully operational at four cohorts (80 students). The students will be recruited from among the 31,000 male prisoners in the 26-prison system operated by the Michigan Department of Corrections. Prospective students will need letters of recommendation from their warden, chaplain, or prison school principal. They will apply to the college, write an essay, and possibly be interviewed by video. If accepted, they will be moved to the Muskegon Correctional Facility. For a lot of these men, this will be the first real community they have had since being incarcerated.

The seeds for HWPEP were sown by a student in Calvin University’s Calvin Prison Initiative (CPI) at Handlon Correctional Facility in Ionia, MI. He was a pen pal with Dr. Jared Ortiz, a professor at Hope College, and came up with the rather unusual idea that he and his fellow students at Handlon should host a conference on restorative justice at Hope College. That conference, “Hope for Restoration: Radical Hospitality and Prison Reform,” took place on March 4, 2017, and the CPI students participated virtually from Handlon. 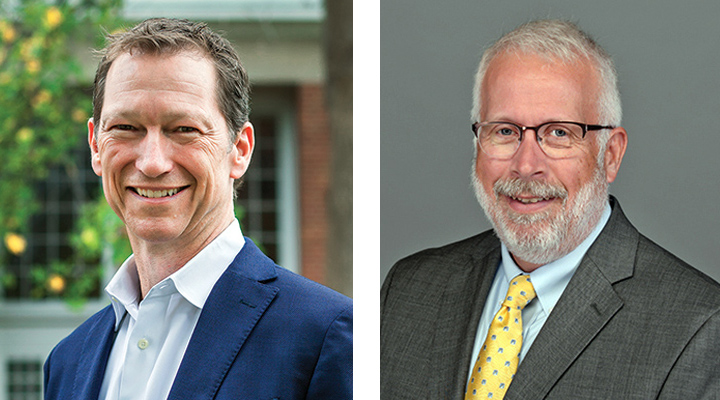 Inspired by the conference, about 20 Hope and Western professors got together to discuss whether something like the CPI program could serve as a model for Hope and Western. WTS Professor of Ethics and Theology David Stubbs was particularly struck by the idea, and after several talks with the people at Calvin and visits to the Handlon prison, he became convinced he should devote himself to this important project. Soon Professor of Kinesiology Richard Ray of Hope College was on board, too, and the CPI leadership graciously took them under their wings. They visited Angola Prison in Louisiana, where they learned that prior to its B.A. program, there were 4000 violent incidents a year. That fell to 400. Even more striking, after Calvin University instituted its program at Handlon Correctional Facility, over 1000 annual violent incidents decreased to eight. Calvin student cohorts changed the culture. This ignited the imaginations of professors Stubbs and Ray.

“We saw the unbelievable things happening to the men at Handlon, many of whom had spent decades behind bars,” Ray shares. “They were clearly not the people they used to be. The work Calvin folks were doing with these men was really changing them.”

“Many of them did something bad when they were 17 years old, but now they’re 40, 50 years old,” explains Stubbs. “Having a vocation, something they can give back to their families and communities, is incredibly humanizing.” 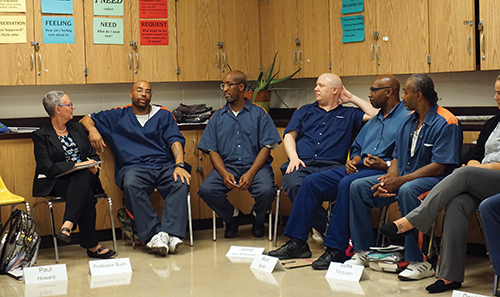 Dr. Pam Bush (left) listens to a student reflect on the class discussion.

The two professors and a steering committee spent 18 months preparing for the pilot program launch, earning the support of the Michigan Department of Corrections (MDOC), the warden at Muskegon Correctional Facility, and the support of then presidents Timothy Brown (WTS) and Dennis Voskuil (Hope).

Dr. Stubbs taught the first class, “What are People For?” to a cohort of 20 students in the Spring of 2019. This was followed by “Differing Meanings of Freedom” by Dr. Jim Allis (Hope), “Communicating with Courage and Compassion” by Dr. Pam Bush (WTS), “What is the Good Life?” by Dr. Steven Bouma-Prediger (Hope), and “Friendship and Community” by Drs. Dennis Feaster and Curtis Gruenler (Hope).

The men in the program were thrilled to be gaining an education and very quickly began teaching bunkmates and family members what they were learning. Not only were HWPEP students becoming transformed, they began stopping fights in the yard using non-violent communication techniques they learned in class.

“A chance to be a college student is a reminder that God is not finished with me.”

As one student aptly put it, “Most of my life has been a journey in trying to find something greater than myself. Getting a college education would give me the tools necessary to complete my journey—to be a better man, to be a bigger person than I once was, to contribute to the world around me in a positive way, and to be what God intended me to be—his true and faithful servant.”

Recent WTS graduate Gene Ryan ’21 served as a teaching assistant, reading through students’ weekly papers and offering feedback. “I remain blessed by the connections made with the students, having seen the work they put into their writing and heard their wisdom weekly in the classroom,” he says. “Walls and bars cannot contain the work of the mind. These students showed me that, and it is a lesson I will not soon forget”. 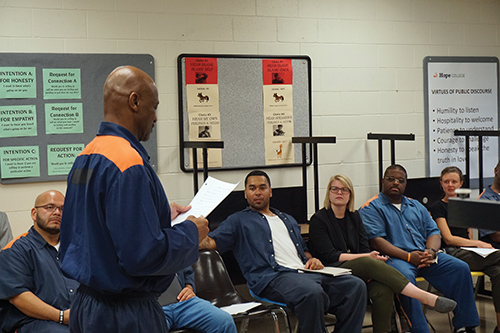 A student reads his paper to fellow classmates and teaching assistants Anne Elzinga and Amber Morris.

In 2020, coronavirus lockdowns temporarily halted HWPEP as visitors were not allowed into the prison facilities. Sadly, the Muskegon Correctional Facility suffered an illness rate of over 80%, and nine inmates lost their lives to the virus. Eventually, “Friendship and Community” was able to be completed as a correspondence course, and another course entitled “Exploring Faith, Leadership, and Service” was offered and also was completed by correspondence.

Moving forward with HWPEP will involve many critical steps, including Higher Learning Commission approval of MCF as a satellite campus of Hope College, the recruitment of faculty, and the recruitment of a robust pool of generous donors who recognize the redemptive potential of education to transform those locked away from society.

“Why a prison education program? It is part of the Christian mission of our schools,” says co-director David Stubbs. “At the heart of a liberal arts education is equipping people with a vision of what human life is all about, who they are, and who they can be. These men are changed by that vision as well. Please pray for us. HWPEP a wonderful thing to be a part of and a privilege as well.”

A generous donor has committed to match gifts to WTS in support of the HWPEP program up to $100,000 each year for four years. This gift holds the promise of serving as a transformational catalyst and is the most significant in HWPEP’s history. To donate to the program, visit westernsem.edu/hope-western-prison-education-give

Vision
To provide a Christian liberal arts education to incarcerated men with the goal of renewing minds, forming persons, and helping transform the prison, the college, the seminary, and the larger community into places where “justice and peace embrace” (Psalm 85:10).

Mission
The Hope-Western Prison Education Program provides a Christian liberal arts education to incarcerated men with long-term sentences at Muskegon Correctional Facility. As a covenant partnership between Hope College and Western Theological Seminary, the program strives to form thoughtful and wise citizens dedicated to improving their communities—whether inside or outside of prison.