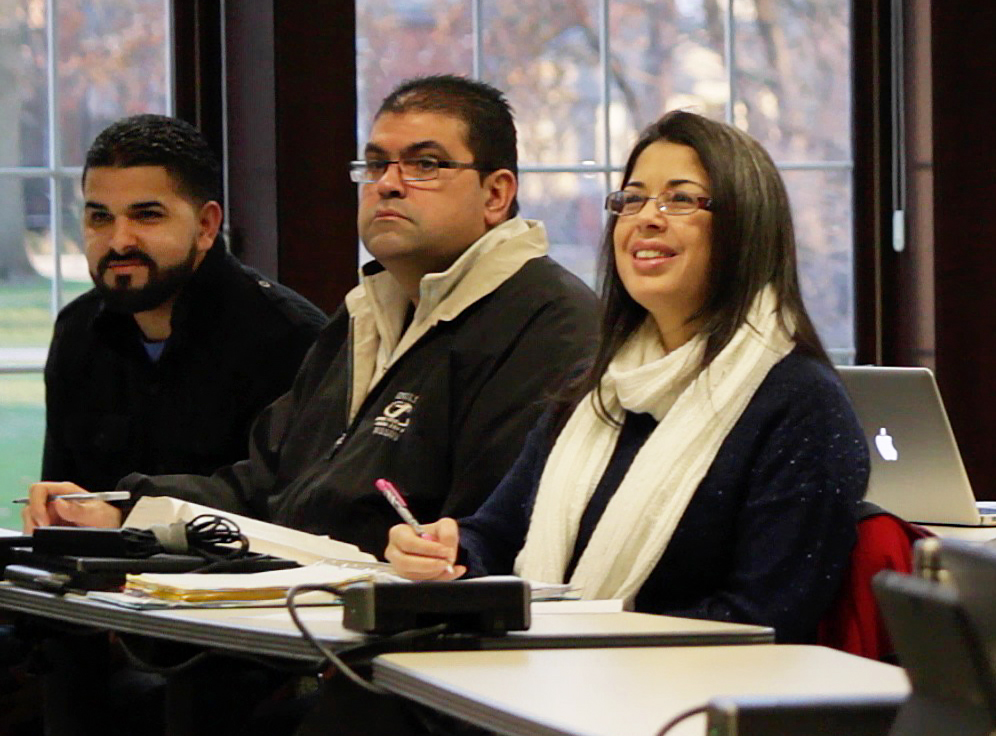 What do you get when you take a Hispanic family from a Pentecostal background and put them in a Reformed theological seminary?

You get a seminary that is more culturally aware, and a family that learns to think outside the box.

Luis Torres had enrolled in the WTS Graduate Certificate in Urban Pastoral Ministry (GCUPM) program in 2011.

“In my heart was always a desire to study, but because of my financial situation it was hard to go to school,” he says. His friend and mentor, C.J. Kingdom-Grier, who works in Western’s Admissions Department, encouraged him to pursue his dream.

Luis works as the Connections Coordinator at Engedi Church in Holland and feels his studies at WTS have helped him navigate cultural differences within his own church body.

“Western has been a tool in my life helping to connect me with people from outside my normal social circles and outside my own traditions.”

After much encouraging, Luis’s parents, Gretchen and Javier Torres, also enrolled in the GCUPM program this year.

Their experience with Hispanic ministries in Holland, the Chicago area, and Puerto Rico provide invaluable insight into the fastest growing population in the country.

Javier is the pastor of Pentecostal Church of God, and Gretchen ministers alongside him. Gretchen is also the administrator of the Instituto Bíblico Ebenezer (IBE), a Hispanic theological training institute headquartered in Chicago.

“We want to make a difference in the Hispanic community, and that’s why we’re here,” Javier says. “We have to first reach the community and then learn other cultures too. We learn a lot at Western and to know the Bible through every point of view is really important.”

For Gretchen, the Lord has opened doors she never expected. WTS was exploring ways to be involved in theological education for Latino pastors when President Tim Brown and Academic Dean Leanne Van Dyk found out that she was the administrator of IBE.

After Gretchen explained IBE’s curriculum and vision to develop leaders and pastors in the Hispanic community, WTS invited her to host the institute within the seminary.

Since October 27, more than 30 Latino pastors have been on the seminary campus each Monday night for classes taught by IBE instructors. Gretchen says the students are happier and more comfortable in their new learning environment.

Recently Gretchen organized “Tabernacle Night,” where first year IBE students presented models they made of the Tabernacle as well as priestly garments. Dr. Tom Boogaart spoke on the meaning of the Tabernacle, and the event was translated in English and Spanish. Over 150 people attended.

“I believe God wants unity in his church,” Gretchen says. “Coming from one church sometimes we think ‘we are the one,’ but that’s wrong.”

Javier adds, “We’re still very conservative in our church, but we have an open mind. I’m still Pentecostal, but this experience with Western and the Reformed church is really, really good for us.”

“Never in a million years did I think I’d have my parents as classmates,” Luis remarks. “They taught me how to walk, and now we’re being taught together the Word of God—so God is teaching all three of us how to walk.”

“To be honest, the language is a big, big challenge for us…it’s a barrier,” says Javier. “But we know we can do it, so why not give it a try? That’s why we’re here. It’s fun to see my son in the corner and my wife by my side.”

“We have to prepare in ministry in order to to reach others—in our case, the Hispanic community,” Gretchen says. “I believe this program is going to help me to grow, and I’m going to help others to grow too.”